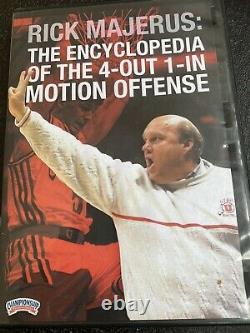 44 students received honor roll. Coaches, this is the motion offense DVD you have been asking for! Over 4 hours of top-notch instruction with "the coach's coach, " Rick Majerus, will help you and your team completely understand every facet of this effective offense! The coaching style, teaching methods and spectacular presentation in this, "the most comprehensive presentation - on any offense - ever, " will allow you, regardless of your coaching level, to implement the 4-out1-in motion offense and will put you in a better position to win.

By using this potent offense, Coach Majerus has averaged 21 wins a year and has never had a losing season in his 19-year coaching career. Rick Majerus and the 4-out1-in motion offense are responsible for orchestrating 422 collegiate wins, 11 NCAA Tournaments appearances, four Sweet Sixteen appearances and the National Runner-up finish in 1998. After 32 years in coaching, Majerus unveils the secrets of this powerful offense giving you the opportunity to learn from one of the greatest minds in basketball today. Majerus has created an offense that will put your team in a position to go from good to great and from great to phenomenal. In this presentation, he builds the 4-out 1-in offense before your eyes and includes all of the keys, rules, cuts, screens, post moves, switches and reverse actions. This 4-out-1-in motion offense will help neutralize a more talented opponent and it will take away a home court advantage when you're on the road. Coach Majerus thoroughly teaches his 14 Keys to the 4-Out-1-In and highlights his Eight Rules for Effective Offense that must be followed to efficiently run the 4-out-1-in. After reviewing the basic principles, Majerus demonstrates the proper positioning and spacing for all five players. He gives an in-depth discussion of why you might want to use this offense and how to use it to your greatest advantage. He teaches several counters, reads, options and plays that can enhance the basic motion, including: baseline drives, plays for perimeter or post opportunities, and a special down screen series. All of these options are designed to create excellent scoring opportunities.

Majerus progressively combines all of his individual drills to build this dominating offensive system. Coach Majerus does an amazing job of effectively sharing the secrets of one of the most feared offenses in the game of basketball. His tactics, techniques and principles show how easy it is to implement and how hard it is to stop.

Majerus provides extensive game footage to help reinforce the basic principles. This DVD is conveniently broken down into chapters to make finding any segment easy. The item "Rick Majerus The encyclopedia of the 4-out 1-in motion offense" is in sale since Sunday, March 21, 2021. This item is in the category "Sporting Goods\Team Sports\Basketball\Training Aids". The seller is "robefran" and is located in Brattholmen.

This item can be shipped worldwide.