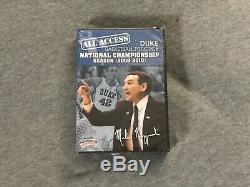 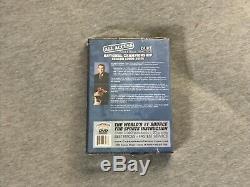 Got this DVD set as a gift but already had it. Product is brand new in its original wrapper.

5x NCAA Champions, over 1,000 wins - most wins by an NCAA college coach; USA Basketball Head Coach, 2014 Gold Medal FIBA World Basketball Cup, 5 gold medals in international competition. One of the things that separates Duke from the pack is how Mike Krzyzewski and his staff effectively personalize their offense and defense to fit their personnel. In this all access DVD package, you will learn the tactics and drills employed by Coach K and his staff to capitalize on the strengths of their personnel. This video series was filmed at the beginning of the 2009-10 season; a season that saw the Duke Blue Devils claim the NCAA National Championship. More than 10 hours of exhaustive basketball instruction. Video breakdowns featuring Coach K and assistant coaches, Steve Wojciechowski and Chris Collins. Throughout each practice Krzyzewski explains his coaching philosophies on offense, defense, transition, basketball fundamentals and many more aspects of the game. He shares his wisdom on team concepts such as player roles, captain selection, team camaraderie and other practical ideas that can be implemented into your own coaching philosophy and team concepts. Krzyzewski begins with a defensive walk-through where he demonstrates and teaches his players why and how to communicate on defense, how to create numerical advantages, how to guard ball screens, how to personalize their defense depending on the opponent, and teaching the big men where to position themselves to draw charges.

Moving to the offensive side of the ball, Coach K addresses key fundamentals and player responsibilities such as looking for early post opportunities, creating opportunities to draw fouls, how to feed the post, what reads to make off of several actions, and how to stretch the defense physically and mentally. The drills and exercises throughout this video specifically focus on one or more of the previously listed areas of focus and are emphasized in great detail by Krzyzewski and his staff. You'll see a multitude of Duke's efficient half- and full-court drills designed to keep everyone on the team involved and improving with each practice.

From 5-on-0, 3-on-3, 5-on-5, to perimeter and post offensive and defensive breakdown drills, and short scrimmages, you'll get an in-depth look at the drills and concepts that made Duke the 2010 NCAA Champions. Associate Head Coaches Chris Collins and Steve Wojciechowski present an in-depth look at Duke's offense. Learn how to put constant pressure on the defense, confuse them and force them to be more cautious.